Everyone’s a critic: Designing logos in a new age of public opinion

Like many designers I know, I am a packaging obsessive. I’ll admit it: I often buy the bottle of wine with the prettiest label, and I rarely regret my decision. I also delight in scouring the grocery store in search of the newest products and designs.

As a result, I can tell you offhand the latest companies that have gone through a recent packaging overhaul (Hudsonville Ice Cream comes to mind). You’d think I’d have a hot take on one of the biggest and most-publicized rebrands recently.

Of course, I’m talking about the new Slack logo. Everyone has an opinion. I first noticed the new logo when I logged in and was greeted with a deeper, richer plum-colored background. It was pleasant. I clicked over to Slack’s post about the new look, and I can see where the company is coming from. I can’t imagine managing an 11-color logo across countless platforms and applications. The new logo, designed by the venerable Pentagram, is simpler and sleeker and much more versatile.

In Twitter conversations about Slack’s new logo and other polarizing rebrands (Zara’s new, distinctly narrower look, for example), Michael Bierut’s 2013 essay “Graphic Design Criticism as a Spectator Sport“ resurfaced. In this essay, Bierut muses about a fictional past in which neighbors casually discuss Tropicana’s updated packaging. This, of course, never happened in Bierut’s imaginary 1969. Widespread design criticism is a distinctly new phenomenon.

Ultimately, I wonder if the question “what do you think of the new Slack logo?” is the right question at all. It all comes down to how we measure the success of a rebranding campaign, and those metrics should be defined by what a new logo can and cannot do.

A new logo can shift perceptions. After the ousting of CEO Travis Kalanick, Uber, which rebranded only two years earlier, needed a fresh start. With its new brand, Uber sought to be immediately recognizable around the globe and across language barriers. The new, more-abstract logo helped the company connect with people in countries where “mobility” means anything from a bicycle to a tuk tuk.

A new logo can give internal stakeholders something to rally around. After a change in leadership and a change in its business model, Airfoil client Village Green needed a new brand that inspired and encouraged its employees. The new look also needed to signal a fresh start for the company. Airfoil developed a robust identity and introduced the tagline “This is life in the green.” This message resonated strongly with employees, becoming an internal rallying cry.

A new logo can open you up to new audience. Diet Coke recently debuted a sleek new look and four new flavors, driven by the brand’s desire to attract the ever-elusive Millennial audience. The brand may have pulled it off. (Note: This Millennial author may or may not be drinking the Ginger Lime variety at this very moment.) Coca-Cola recently reported optimistic new sales figures that they say were driven, in part, by the success of Diet Coke’s rebranding campaign.

A new logo cannot make everyone happy. Designers walk a precarious line. Their work involves creating meaning and resonance for external audiences while gaining approval from internal stakeholders, who often have diverse and contradictory motivations. In Bierut’s essay, he highlights UPS, a company that had recently abandoned its Paul Rand-designed shield for a modern, simple look. This was not an easy undertaking, and many firms -- including Beruit’s -- attempted and failed. The resulting logo, designed by Futurebrand, was only a small part of the whole story. As Bierut explains,”Futurebrand had done something that we and the others had failed to do: They had convinced the client to accept their solution.”

So, will the Slack rebrand ultimately be successful? It’s far too early to tell, and Slack CEO Stewart Butterfield acknowledged that fact in a tweet. In the meantime, I suggest we all cool it a bit on the hot takes. Initial impressions are important, but assessing a campaign’s overall success requires plenty of patience and precise measurement against your brand’s longer-term goals.!

If you are considering updating your brand but aren't sure where to get started, let Airfoil help. Contact us today! 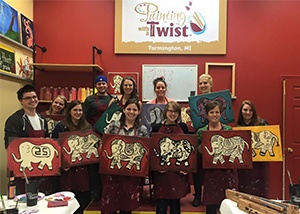 Thinking outside of the box, while painting inside the lines